Liu Yuchun was recruited to teach martial arts and Miao Dao for the military unit based at Bao Ding (保定）during the early republican period. Warlord Cao Kun(曹锟) set up a Miao Dao company then, which he deployed to support his artillery units. Using pistols and Miao Dao, soldiers of the company were intended to further enhance the close combat capabilities of the artillery units. It was during this period that the term ‘Miao Dao／苗刀’ was formalized. It was also during this time that Liu met Guo Changshen(郭长生), who became his disciple and received the complete training in Miaodao.

Born in 1848 Heibei, Liu Yuchun learnt Tongbei in his youth and was already a skilled martial artist when he met Xie Jinfen（谢晋汾). A challenge between the two took place and while Liu had the advantage in barehands, his spear work was of no match for Xie’s skill in Miao Dao. After that, both became good friends with Liu learning Xie’s Miaodao and Xie learning Tongbei from Liu.

One of the top martial artist of his time, Guo Changshen became an instructor in the Nanjing Central Guoshu Academy through a rigorous selection process. Guo finished in the top grade (top 17) from a total of over 400 participants. Martial artists firstly competed in forms (barehands and weapons) before qualifying for the sparring contest, which was matched through drawing lots regardless of age or weight. Apart from mastery in miaodao, Guo was also well known for tongbei piqua. He had such reputation for his swordsmanship that people began to nickname him ‘the swallow’ (‘郭燕子’).

Hu Xin was among the first batch of graduates from the Nanjing Central Guoshu Academy. He studied closely with Zhu Guo Fu (朱国福), Sun Lutang (孙禄堂) and Li Jin Ling(李景林). Due to the war, teachings of Miao Dao skills were interrupted when lessons were suspended. Hu Xin quickly found Guo Changshen, and recognizing his talent, Guo completely passed on to him the Miao Dao skills. This was uncharacteristic of Guo Changshen, who was known for keeping such skills close to his heart. Inevitably, this resulted to the small pool of Miao Dao practitioners we see today.

Hu Xin was not famous and remained low profile even though he was very talented. Not only he finished learning the 2 sets of Miao Dao routines, he mastered their applications and also the Miao Dao sparring set. This sparring set is unheard off in today’s Miao Dao circle. In addition during the same period, Guo Changshen’s peers – who were unknown but highly skilled – had also trained Hu Xin in the arts of Han Dao (西汉长刀) and Yu Lin Jun Dao (御林军刀). Both are about using the double handed long sabre but differs significantly in technique from each other.

Before joining the Chinese military in the 1930s, Li Kun had mastered Zhoujia Quan (周家拳）under Lin Zuo Yuan (林卓垣), the student of founder Zhou Long(周龙). Due to his extensive travel with the military, he chanced upon many high level martial artists and expanded his knowledge by learning from them. After the war, he settled in Malaysia then Singapore, where he consolidated his knowledge to form the Zhoujia Liuhe(六合) tradition, consisting of six different styles and including both the northern and southern methods. The Eight Method Broadsword (破锋八刀) was a skill Li Kun learned while in the military. He in turn passed down this skill to his disciples in Singapore/ Malaysia including Yu Zhan Fen. 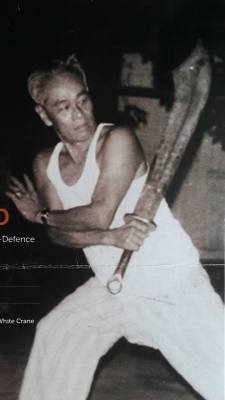 Yu Zhan Fen was a master of Choy Li Futt and Zhoujia Liuhe (Jowgar in Singapore/ Malaysia). He was from Guangdong but relocated to Singapore/ Malaysia for a better life, where he continued his Chinese medical practice. He became Li Kun’s top disciple in the Zhoujia Liuhe lineage after they exchanged skills and Li’s skill proved to be superior.  Both of them are around the same age and got along very well, even though one is a Master and the other a disciple. Yu Zhan Fen also trained with his peers, who were Nationalist soldiers, in applications and the counter routines of the Eight Method Broadsword (破锋八刀). Comprising of movements from the Miao Dao set, martial arts experts – including those from the Nanjing Central Guoshu Academy like Guo Changshen – organized the form into 8 simple and practical sections, for military training and use against the aggressor during WWII. 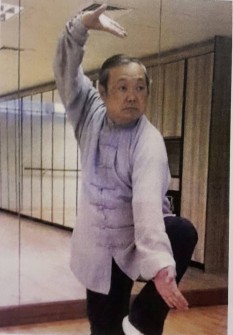 Master Ngiam Tong Kheng is the current Chief Instructor at Miaodao International. He is well versed in many different Chinese Martial arts, including the Northen, Southern, Internal and External styles. In the 1960s, he spent years learning under Grandmasters Yu Zhan Fen and Hu Xin, and that had allowed the present day Miaodao International to be formed. Currently, there are no known successors from both Grandmasters other than Master Ngiam, who has consolidated their teachings in Miao Dao and related fighting arts for presenting and passing on through Miaodao International. The essence taught by Master Ngiam at our training center stems from a coherent historical context, which cannot be replicated by any other Masters in the World today. For example, present day Miao Dao teachers and masters are no doubt experts in their field; but could offer no knowledge and connection to related arts like the Eight Method Broadsword (破锋八刀) and the upstream Han Dao (西汉长刀) and Yu Lin Jun Dao (御林军刀). In fact, many times the terms Yu Lin Jun Dao (御林军刀) and Miao Dao (苗刀) are used interchangeably in present day context to mean the same thing. But the training Master Ngiam offers indicate they are in fact different with separate sets of focus and used at different times of history.